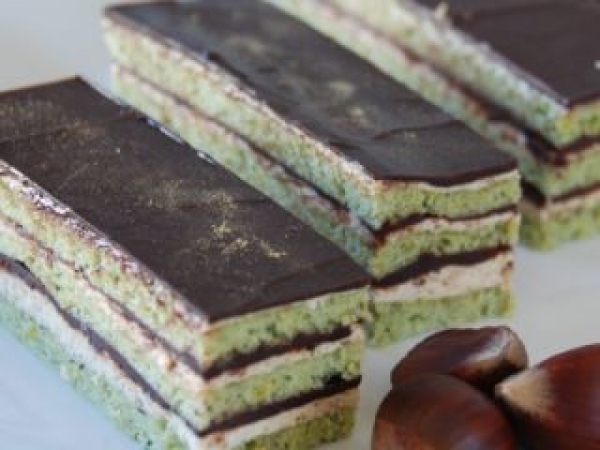 In the bowl of a stand mixer fitted with the whisk attachment (or using a handheld mixer), beat the egg whites until they form soft peaks.

Add the granulated sugar and beat until the peaks are stiff and glossy.

In another bowl beat the almonds, pistachios, icing sugar and eggs on medium speed until light and voluminous, about 3 minutes.

In the bowl of a stand mixer fitted with the whisk attachment (or using a handheld mixer), beat the egg whites until they form soft peaks.

Add the granulated sugar and beat until the peaks are stiff and glossy.

In another bowl beat the almonds, pistachios, icing sugar and eggs on medium speed until light and voluminous, about 3 minutes.

Step 2
Add the flour and fold into the mixture, do not over mix. Using a rubber spatula, gently fold the meringue into the almond mixture and then fold in the melted butter. Divide the batter between the pans and spread it evenly to cover the entire surface of each pan.

Bake the cake layers until they are lightly browned and just springy to the touch.

Approximately 10 minutes, no longer. could be less depending on your oven. Put the pans on a heatproof counter and run a sharp knife along the edges of the cake to loosen it from the pan.

Cover each with a sheet of wax paper, turn the pans over, and unmold.

Carefully peel away the parchment, then turn the parchment over and use it to cover the cakes. Let the cakes cool to room temperature.

Remove from pan and allow to cool.

As soon as they are cool enough to handle remove the shells and as much of the furry brown skin.

The removal of the skin is really only to produce a pale butter cream so optional.

Put milk and de-shelled chestnut into a pan and cook over a gentle heat for 15 minutes.

Blend chestnuts until smooth and put aside. Combine the sugar, water in a small saucepan and warm over medium heat just until the sugar dissolves. Continue to cook, without stirring, until the syrup reaches 240?F on a candy or instant-read thermometer.

Once it reaches that temperature, remove the syrup from the heat.
While the syrup is heating, begin whisking the egg whites at high speed in the bowl of your mixer using the whisk attachment.

Whisk until soft peaks form. When the sugar syrup reaches the correct temperature and you remove it from the heat, reduce the mixer speed to low speed and begin slowly (very slowly) pouring the syrup down the side of the bowl being very careful not to splatter the syrup into the path of the whisk attachment.

Some of the syrup will spin onto the sides of the bowl but don?t worry about this and don?t try to stir it into the mixture as it will harden.

Raise the speed to medium-high and continue beating until the egg whites are thick and the mixture is cool to the touch (about 5 minutes or so).

While the egg mixture is beating, place the softened butter in a bowl and mash it with a spatula until you have a soft creamy mass. With the mixer on medium speed, begin adding in two-tablespoon chunks. When all the butter has been incorporated, raise the mixer speed to high and beat until the buttercream is thick and shiny. At this point add the blended chestnuts and beat for an additional minute or so.

Place chopped chocolate into a bowl and pour over hot cream and sit for a few minutes.

Stir until all chocolate has melted and keep warm over a pan of hot water until ready to assemble cake.
Step 5
Assembling the Opéra Cake:
Place one square of jonconde sponge on a baking sheet.

Spread about one-third of the buttercream over this layer and refrigerate until it hardens.
Remove from the fridge and spread a third of the chocolate ganache on top.

Spread another third of the buttercream on the cake, refrigerate and spread another layer of chocolate ganache on top.

Top with the third square joconde.

Spread the remaining buttercream on top of the final layer of joconde and then refrigerate and finish with the last layer of ganache.

Refrigerate for at least 4 hours.

We use cookies on our website. Some of them are essential for the operation of the site, while others help us to improve this site and the user experience (tracking cookies). You can decide for yourself whether you want to allow cookies or not. Please note that if you reject them, you may not be able to use all the functionalities of the site.